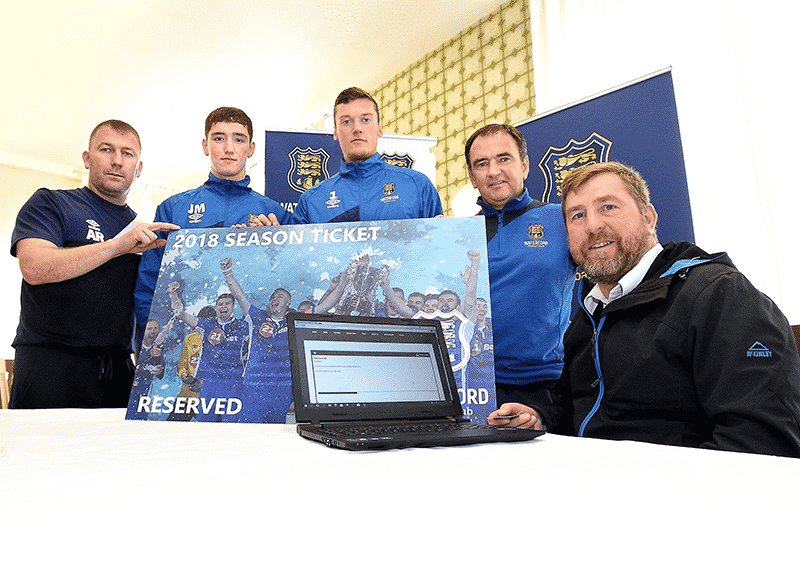 With Premier Division football returning to Waterford next season for the first time in ten years, Waterford FC is delighted to announce the range of ticketing packages available to supporters including a special early bird offer in place until the 1st December 2017 at a 10% discount.

With an increase in the number of SSE Airtricity League games to be hosted at the RSC in 2018 and with the likes of Cork City, Dundalk and Shamrock Rovers coming to town, the demand for match tickets is expected to be high; so the purchase of a Season Ticket is the best way to ensure that you can follow the Blues at home, as they embark on a new and exciting campaign in the top division of Irish football.

Season Ticket prices in 2018 will range from just €75.00 up to €335.00 for individuals who wish to reserve their own personal seat and gain free admission to all underage games. A series of family ticket packages will also be available for the first time, while students and senior citizens can avail of reduced packages.

Speaking at the launch of the new Season Ticket packages in the Woodlands Hotel, Waterford FC Director of Football Pat Fenlon commented:

“2018 will be an exciting time for Blues’ supporters and we believe our new ticketing structure and prices will be competitive and appealing to fans young and old.

“We finished the 2017 First Division season with the 7th highest average attendance in the country despite the fact that we had little or no away support in the RSC for our games. That will change in 2018 as visiting fan numbers increase, so we urge supporters to purchase their Season Tickets as early as possible to avoid disappointment.

“The fans were fantastic this year and it was particularly special to see the number of new, young supporters attending and enjoying their evenings out at the RSC. With the various family packages that the club is introducing, we hope to see those faces in the stands again in 2018.”

The full range of Season Tickets will be available via the Waterford FC website at www.waterfordfc.ie/tickets/ from lunchtime on Monday 6th November 2017.