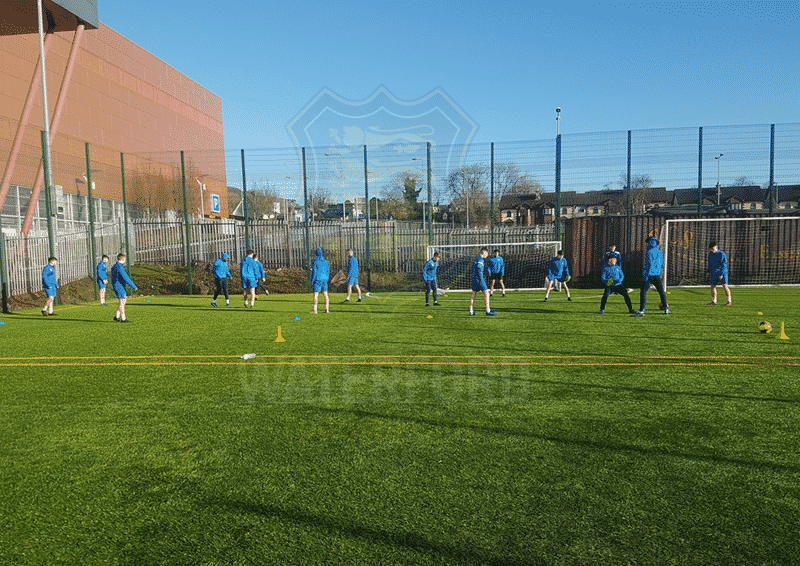 Waterford FC is delighted to announce details of our Academy teams for the 2019 season. This year, the club will participate in the Under-13, Under-15, Under-17 and Under-19 National League which begin this month. Over the past months, assessments have taken place and squad have now been finalised by all management staff and we’re delighted to reveal them.

Michael Geoghegan, Seán Geoghegan and Mark Downey join the club’s Academy coaching staff for 2019 to work with the Under-13 team:

“The Under 13 squad has being training since early January,” manager Michael Geoghegan explained. “The squad is made up of players drawn from the Waterford, Kilkenny, Wexford and South Tipperary Leagues. Thirteen different south east clubs are represented. The boys play St Patrick’s away this Sunday with other matches lined up against Shelbourne and the South East ETP. “

Waterford FC U17 squad has been finalized and are back in training ahead of the 2019 League of Ireland campaign.

This group have been working hard under the management team of Conor Coad and Shane Nolan in preparation for the upcoming season which begins on March 2nd at home against UCD.

Still underage from last year’s U17 group are Tega Agberhiere, Ethan Flynn, Donal Porter, Cian Browne and Kyle Cuddy. These players have a year’s experience at Under-17 level under their belts and will be looking to kick on and make a big impression this coming season.

Exciting prospects Scott Delahunty and Sam Morrissey were promoted from our Under-15 squad to the Under-17 squad halfway through last season.

Moving up also from last year’s Under-15 squad are James Donnelly, Jack Deegan, Lekan Oki, Abel Alabi, Dean Larkin, Liam Kervick and Charlie Binions. We are delighted to welcome back Seán Maher and Killian Griffin to the club, who both played with Waterford FC as Under-15s in 2017.

New additions to the club this year are Dylan Butler and Ivan Homoki, who join from Villa FC, and Alan Dunwoody and Kian Carey, both from Dungarvan United. These lads have all have excelled and developed at their local clubs and are looking forward to testing themselves now at a higher level.

Speaking ahead of the new season, the Under-17 manager Conor Coad said, “We’re delighted to be able to give these young players the opportunity to prove themselves against the best in the country and show what they can do.”

“We’re really pleased with the squad as we’ve got some excellent prospects but just as importantly we have a really good, group of genuine lads who have plenty of character and are prepared to work hard to get where they want to be. Pre-season has been excellent so far and we’re looking forward to getting up and running with the league campaign.”

Derek O’Brien, Derek Browne and Brendan White continue to work with the club at Under-15 level. The Under-15s have added lots of new players while holding on to four from last season.

“We are looking forward to the start of the season. The lads are in two weeks now and have really mixed well together and the standard and tempo of the sessions is improving each day so that’s great to see,”manager Derek O’Brien said.

“We have a good mix of lads this year with good balance across the pitch. We have 4 players who finished the season with us last year still eligible and so far have brought in 13 more players from Waterford, Tipperary, Kilkenny and Carlow. Thanks to the schoolboy clubs who have been so helpful to us over the last few months.”

“A big thanks too to Nigel Ray and the Schoolboys League who have worked closely with us to help the players be involved in both squads. They are playing the All-Ireland final against DDSL in a couple of weeks and there are 7 of our new signings involved so best of luck to the lads and the management team.”

Head of Youth Development Gary Hunt steps up to manage the club’s Under-19 team this season. Gary has been involved with the club’s U17s over the last few seasons. He’ll be assisted by Craig ‘Rocky’ Maher for the 2019 season.

“Myself and Rocky are really happy with the squad we have put together for the 2019 season. With this being the final step before first team football it was important that the lads were aware of the importance to being part of Waterford FC at this level, many of which have been part of the club for a few years now,” Gary says.

“We have a good pre-season lined up with the lads and we look forward to getting some games under the lad’s belts but at the same time working hard with them for any first team opportunities that may arise.”

“The majority of this squad featured in the 2017 squad who were Southern Division winners and also Mark Farren Cup winners so they will be looking to perform both within the U19 fixtures but also with an eye on first team football. The fixtures have been released and we host Galway on Sunday 17th of March so that is what we are building towards now.”

The U19 squad have retained 17 players from last season’s U17 and U19 squads and have made four new signing who we are delighted to offer them the opportunity to play at this level.

Kallum Broaders returns after commitments mid-season last year saw his season cut short. Adham Masood impressed and we were delighted when he wanted to come on board. He will give us something different in those attacking positions.

Danny Reynolds from Dungarvan is a versatile players who can play in several positions and has a fantastic left foot. Finally, Oisin Griffin has come in and again the U19 management were delighted to be in a position to offer him the opportunity as he has been very close the last couple of seasons. He has gained some excellent experiences playing premier football with Ferrybank.