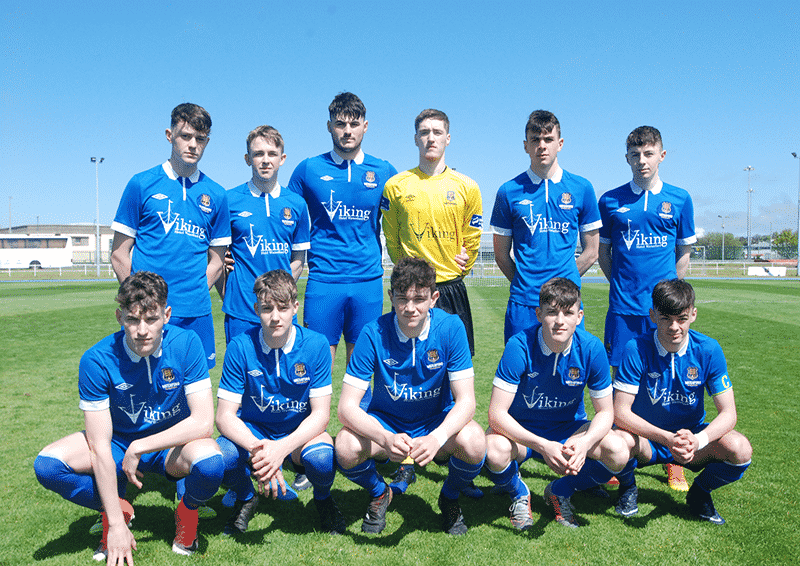 Academy Round-Up: U17s and U19s Both Pick Up a Point in Weekend Action

Waterford FC Under-19s snatched a point from the jaws of defeat at home to Galway United on Sunday with Colm Whelan’s 91st-minute goal earning a 2-2 draw.

The Blues started well on the RSC main pitch and Jack Larkin was first to try his luck after good link-up with Colm Whelan, but his strike was saved by Galway keeper Mark Greaney. Larkin went close again one minute later but his curling free kick flew just beyond the far post.

Midway through the first half, Sean Roche almost opened the scoring; he beat visiting keeper Greaney to a ball down the left and lobbed the ball over the keeper only to see his effort come back off the post.

But the Blues weren’t to be denied a goal for their pressure with Roche making progress down the right before putting the ball on a plate for strike partner Colm Whelan to fire the Blues into a 1-0 lead.

Galway had a good chance of their own just before half-time but Wilson Waweru effort across the goal struck the post.

Galway pressed the Blues in the second half and Adam Rooney fired low into the bottom corner on 71 minutes to level the game.

And with just eight minutes left on the clock, Evan Coyne curled brilliantly into the top corner to give the visitors a 2-1 lead.

But the Blues were determined to take something from the game and in the first minute of stoppage time, Justin Croke produced a superb cross to find Colm Whelan in front of goal and he make no mistake firing past Galway keeper Greaney to earn a point. Our U17s travelled to Cobh on Sunday looking to make it three wins from three only to be the denied by a stoppage-time equaliser.

The surface was not one that would allow the Blues to play a passing game and struggled to deal with this during the first period against a very direct team; giving away possession trying to pass their way through midfield.

The Blues dealt with the aerial attack well and surrendered only a couple of half chances whilst creating several ourselves.

Waterford started the second half better and took the lead on 63 minutes. Niall O’Keeffe whipped in the deep free kick for Reece Murphy to head the Blues into the lead.

The Blues picked up a couple of injuries and with a small squad were limited as to what could change, but continued to defend well against an aerial challenge in the last 20 minutes with decisions not going the Blues way.

It looked as though the Blues U17s had done enough, but a series of corners in stoppage time gave the home side hope and the last of these in the 94th minute saw a deflected shot creep into the bottom corner and with it two points slipped away.

The effort by each and every player was exceptional and they were very unlucky not to secure a battling victory. The U17s go again now at home to Wexford on 15th May.