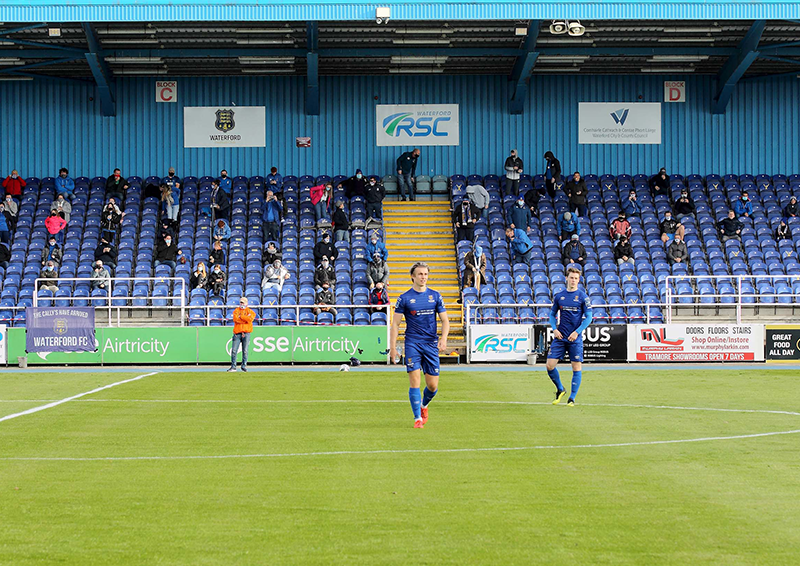 Waterford FC return to the RSC this Sunday afternoon for their penultimate game of the 2020 season against Dundalk.

Fran Rockett’s side will be hoping to return to winning ways after last weekend’s 0-0 draw with Cork City in Turners Cross.

The Blues last faced Dundalk in the RSC last September when a Daniel Kelly goal gave the Lilywhites all three points in what was a competitive encounter between the sides.

The teams last played each other back in August when two Dundalk goals in the last seven minutes saw the Louth club earn a draw, after goals from Matty Smith and Kurtis Byrne had given the Blues the lead.

Dundalk come into Sunday’s game on the back of a 2-1 win over Derry City last weekend before a narrow 2-1 defeat against Molde in the Europa League on Thursday evening.

Both sides will be desperate for three points as the race for European positions continues. The Blues sit in fourth place in the league; with Dundalk currently sitting in third, four points ahead.

“Obviously we were disappointed with the result on Saturday against Cork. You always want to beat your local rivals and the three points would have been huge for us. We created some good chances but just couldn’t grab a goal.

“We all know what Dundalk are capable of. They have proved it by getting to the group stages of the Europa League, but we know what we are capable of as well. We went up there in August and went 2-0 up. Lapses in concentration cost us that day and I know the lads will be wanting to put that right this weekend.

“We’re still in the hunt to finish as high as we can and we have to keep pushing the teams around third and fourth. This group of players have given their all this season. I can’t ask for more from them.”

Team News: Robbie McCourt serves a one-match ban for an accumulation of five yellow cards while Sam Bone continues to miss out due to a hamstring injury.