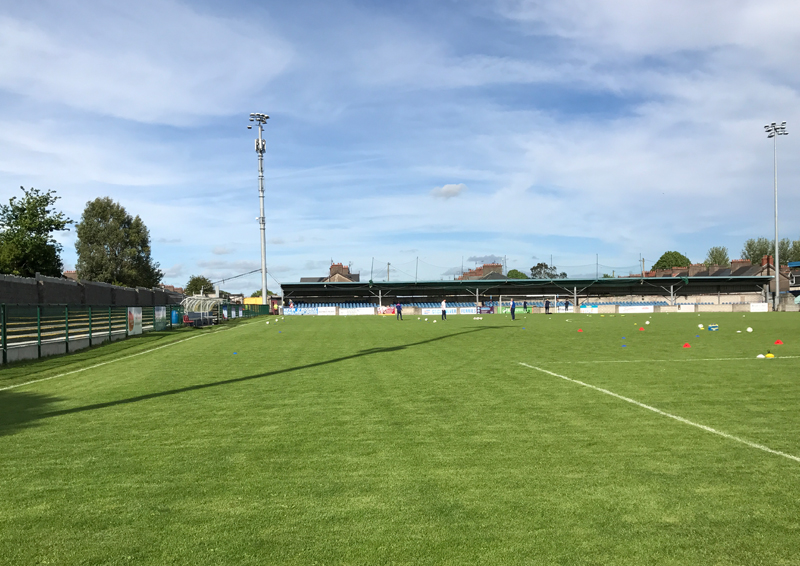 Waterford FC had to settle for a point in St Colman’s Park on Saturday night after a 0-0 draw against Cobh Ramblers. The Blues had the better of the chances throughout but were unable to force a way past Ramblers keeper Paul Hunt.

After Stephen Christopher and Craig Donnellan had half chances for Cobh early in the tie, it was the Blues that really took control once the game settled down with John Martin linking up with David McDaid on 14 minutes but his snapshot from 20 yards went wide of the left-hand post.

Conor Whittle sent in a cross from the right that found Mark O’Sullivan at the back post four minutes later but he headed wide before Derek Daly whipped in a brilliant left-wing corner kick on 19 minutes that found the head of Garry Comerford; his close-range header was superbly kept out by Paul Hunt.

The Blues fans behind the goal were celebrating what looked a certain breakthrough on 40 minutes when David McDaid got space out on the left-side of the penalty area before crossing to the back post for Mark O’Sullivan but after his header struck the woodwork before rolling across goalline where Charlie Fleming cleared.

It was a real let-off for a Cobh Ramblers side that were playing second fiddle to the Blues at this stage and although Jason Abbott tested Matthew Connor with a free kick on 64 minutes, there was a bigger chance for Matthew Whelan soon afterwards but the attacker dragged a shot wide of Connor’s right-hand post.

Whelan headed a fine delivery from Ian Mylod over the crossbar on 73 minutes before David McDaid had a chance at the other end for Waterford seconds later when he took a pass from Garry Comerford but his effort was over Paul Hunt’s crossbar.

With time ticking down, it was Hunt that produced a moment of magic with 86 minutes on the clock when Conor Whittle sent in a cross from the right that was met by John Martin and although his stunning effort seemed destine for the net, the Cobh netminder somehow turned the ball out for a corner kick.

Shane O’Connor was the man that sent in the resulting flag kick from the left that was met by the towering head of Jack Lynch but his goalbound effort was cleared off the line superbly by a headed clearance from Anthony O’Donnell.

Matthew Whelan did have a late chance to win the game for Cobh in the final minute when he took advantage of a slip in the Blues defence but the youngster couldn’t direct his effort on target before Matthew Connor did collect well from O’Donnell in injury time.