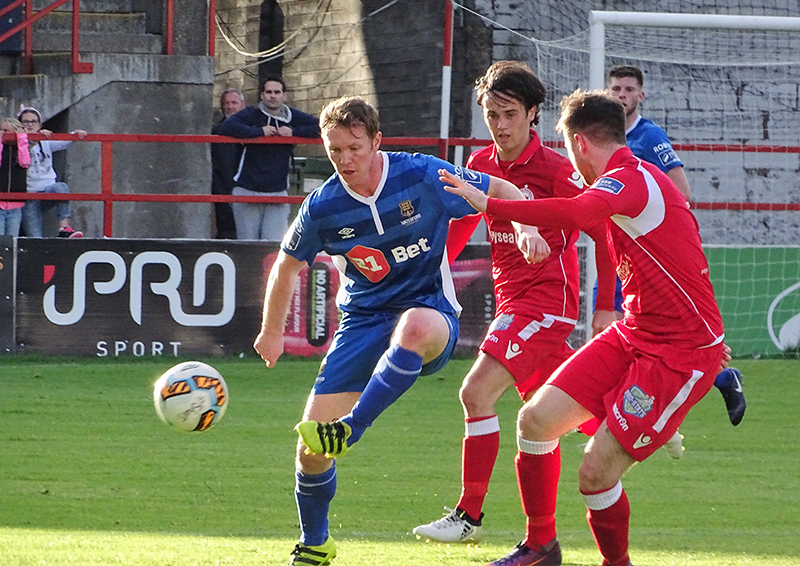 Waterford FC were forced to settle for a point after a late equaliser saw Shelbourne grab a 1-1 draw in Tolka Park.

Shane O’Connor had the Blues in front early on, but Aaron Ashe fired past Matthew Connor to seal a point for the home side in the 90th minute.

The Blues got off to a whirlwind start taking the lead with four minutes on the clock. A neat flick from Mark O’Sullivan set up Derek Daly on the left-side and his first-time cross was fired home by Shane O’Connor under the body of Shelbourne Dean Delany from 12 yards, who got a strong hand but couldn’t keep it out.

Shortly afterwards, Derek Daly stood over a free kick 25-yards from goal after Shelbourne defender Alan Byrne brought down David McDaid as he raced clear on the right-side of the penalty area but the effort from the wide player went over Delany’s crossbar.

Shelbourne keeper Dean Delany made a brilliant save to deny the Blues their second goal of the game on 15 minutes when Daly turned provider for Mark O’Sullivan on the left-side of the area but his right-footed effort was superbly turned around the posts.

The home side created their first chance two minutes later when James English did well down the left-side but his shot from inside the penalty area was wide of Matthew Connor’s near post before English missed a glorious chance to level on 26 minutes.

When Robin Dempsey put in a brilliant tackle on Dylan Kavanagh as he looked to race clear on goal, the ball broke to the Shelbourne striker on the right-side of the penalty area but he blazed wide of Connor’s near post when he should have hit the target.

Adam Evans carved out a half chance for himself with 41 minutes played when he took possession of a breaking ball 20 yards from goal but his shot failed to trouble Blues keeper Matthew Connor as the hosts started to grow in confidence as the half wore on.

The second half saw Shelbourne cause the Blues problems and it was James English that got onto a pass from Adam O’Connor on the right-side of the area but his shot across the area was cut out by keeper Matthew Connor.

It was James English that could have brought his side back on level terms on 76 minutes when he got his head on the end of a left-wing delivery from Adam Evans but his glancing header was just inches wide of Matthew Connor’s far post.

With the Blues defending resolutely throughout the half, chances were at a premium before Patrick McClean set up Anthony McAlavey with 86 minutes played but his well-struck effort flashed over Dean Delany’s crossbar.

Shelbourne struck for an equalising goal to break the hearts of the Waterford faithful as the game entered second-half injury time when Dayle Rooney played the ball into the path of Aaron Ashe and he drilled right-footed shot past Matthew Connor.