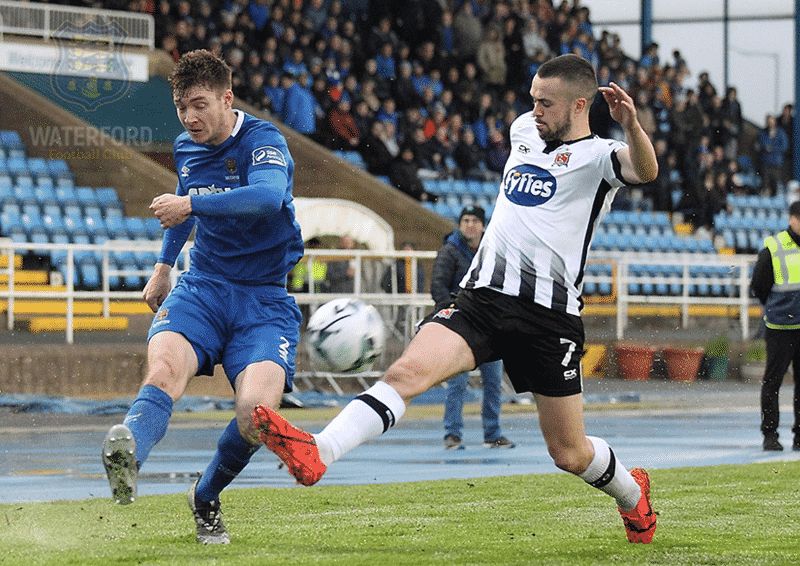 Waterford FC exited the FAI Cup after a 3-1 defeat at the hands of holder Dundalk on Monday night.

A first-half Daniel Kelly hat-trick had Dundalk in control at the break. Maxi Kouogun headed the Blues back into the game and despite a better second-half, Dundalk advanced.

Dundalk’s early pressure paid off when they took a 9th-minute lead. Pat Hoban picked up possession down the right and fired the ball across goal for Kelly to make it 1-0.

The lead was doubled midway through the half. Kelly broke the offside trap from Hoban’s ball and he fired into the back of the net.

Rory Feely almost got back into the game on the half hour but the Blues captain’s header was narrowly wide of the far post.

Dundalk made it 3-0 after 33 minutes; Patrick McEleney crossed for Daniel Kelly to head the ball into the far corner beyond Connor.

Will Fitzgerald took advantage of a mistake at the back but McCarey was quick to save before O’Connors rebound went over the crossbar.

Waterford had another great chance to get back into the game, this time from the penalty spot. Michael O’Connor was fouled by Brian Gartland but Shane Duggan’s penalty kick was saved by McCarey.

The Blues did find a way back into the game on 56 minutes. Georgie Poynton’s free kick wasn’t cleared fully and Maxi Kouogun headed into the top corner.

Michael O’Connor had a golden opportunity on 58 minutes when he latched onto Poynton’s long ball but he fired narrowly wide under pressure from a retreating defender.

McCarey saved from Poynton and JJ Lunney late in the game but it’s the reigning champions who advance to the semi-final despite a good second half performance from Alan Reynolds side.