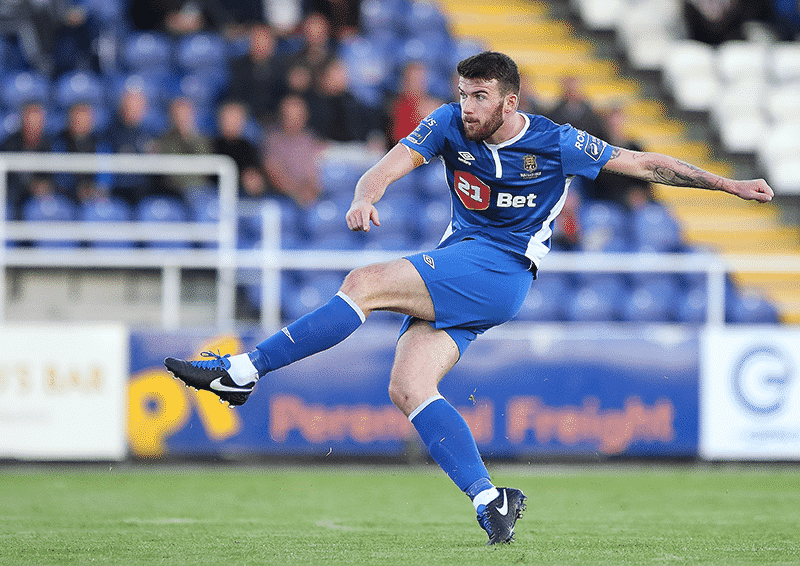 Derry born defender Patrick McClean has become the first player to re-sign for the Blues ahead of the 2018 SSE Airtricity League Premier Division season. McClean, who made 23 appearances for the club last season when the Blues won promotion back to the top flight of Irish football, has tasted Premier Division football before with his native Derry City and became a big fan favourite in the South East in 2017 with a number of standout performances, having settled very well into the Blues’ set-up.

The 20-year-old scored twice for the Blues last season – against UCD in Belfield and against title rivals Cobh, when he headed the match winner at the RSC. He missed the final few games of the season through injury, undergoing an operation on a troublesome shoulder injury that he suffered prior to the mid-season break.

Comfortable at either centre-back or left-back, McClean endeared himself to the supporters with a string of passionate and committed displays on the field.

Speaking on re-signing ahead of the 2018 season, Patrick said;

“I am delighted to have re-signed with Waterford FC ahead of the new campaign. The club has been good to me on and off the pitch this year and I look forward to repaying that goodwill in 2018.

“I am looking forward to testing myself against the best there is in Ireland and show that I belong at the top level. Hopefully as a group of lads we can do well and push Waterford FC onto the next level.”

Director of Football Pat Fenlon and First Team Coach Alan Reynolds are working hard in the background to assemble a competitive squad for 2018 and they are very pleased with their first bit of business.

“Patrick was a big part of our side in the first half of the 2017 season, captaining the team on a number of occasions despite his young age. He showed incredible commitment on the pitch and it is no surprise that the fans took to him so well.

“The injury he sustained was an obvious set-back for both the team and for Patrick personally but he’s working hard now in the off season to be fully fit and ready to go again in 2018. We look forward to welcoming him back to the South East when our training commences ahead of the new season.”