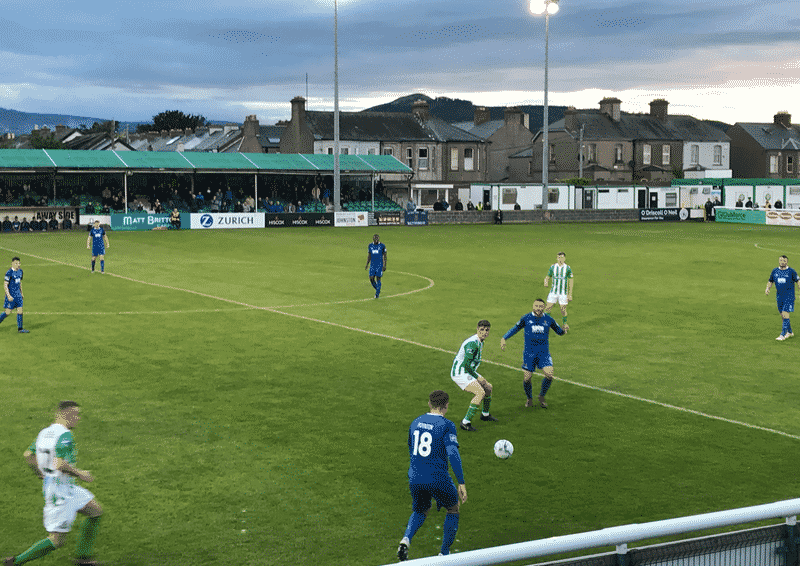 Waterford FC advanced to the EA SPORTS Cup semi final after a 1-0 win over Bray Wanderers on Monday night.

The Blues threatened the Bray goal early when Maxi Kouogun found Izzy Akinade who laid the ball off to Cory Galvin but he could only find the side netting.

Waterford FC opened the scoring on the quarter hour. Izzy Akinade was fouled on the edge of the penalty area and Scott Twine stepped up to brilliant curl the ball into the top corner to make it 1-0.

Gabriel Sava was forced to save from Bastien Hery before Dylan McGlade forced Blues keeper Matthew Connor into a good save.

Joe Doyle was next to threaten, but after breaking the offside trap, he allowed Kouogun to get back to break up the attack.

Scott Twine had a big shout for a penalty on 32 minutes; Scott Twine tackled in the penalty area but referee Robert Rogers waved play on despite the loud calls from players and fans.

Sava saved again from Akinade before a Blues attack full of quality. Matthew Connor started the attack as he found Twine. He linked up with Hery, Galvin and Feely who crossed for Hery again who found Griffin to set up Galvin but his shot was just deflected wide.

Bray had another good chance on the stroke of half time but Connor saved well from Dylan McGlade’s strike from outside the penalty area.

Cory Galvin was first to threaten in the second half after good work from Twine and Akinade.

Bray Wanderers had a great chance to level on the hour mark; a quick free kick set Joe Doyle down the right but his effort came cracking back off the post.

Akinade, Twine and substitute Aaron Drinan all had chances as the Blues looked to put the content beyond the home side, but none could find a way to goal.

Akinade fired over the crossbar before Shane Griffin tested Sava in the Bray goal who made a smart save.

The home side had one last good chance as Hugh Douglas headed on for Doyle but the striker blasted wide from a good position as the Blues ran out 1-0 winners.