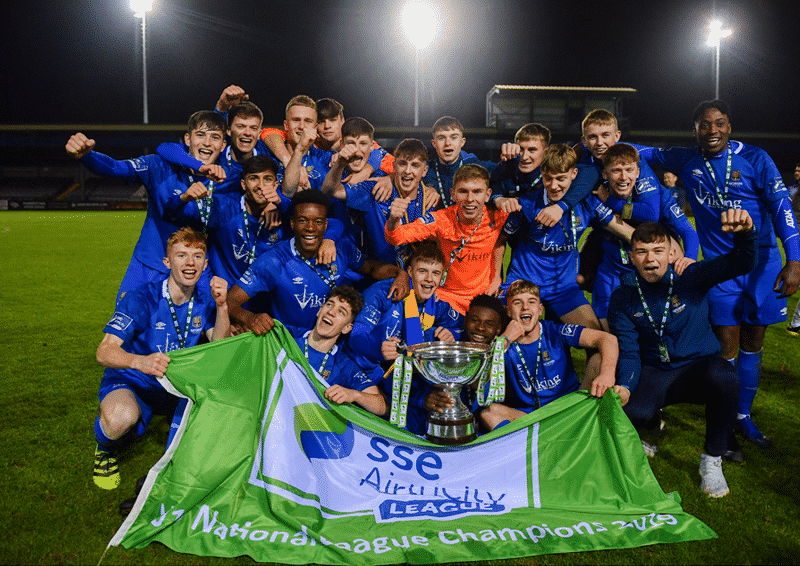 Waterford FC were crowned SSE Airtricity Under 19 League Champions after a deserved 3-1 win against Galway United in Eamonn Deacy Park on Monday night.

The Blues squad, many of who were part of the Mark Farren U17 Cup 2017 winning team, saw off Dundalk and Drogheda United in the quarter and semi finals and it took a brace from striker Alex Phelan and a superb Darragh Power header to seal the title.

Gary Hunt’s side came out of the blocks and Colm Whelan’s free kick into the danger area picked out Alex Phelan at the back post but he couldn’t get enough on the ball.

Phelan had another chance one minute later. Cameron Power did well down the left-channel but Phelan’s shot was inches wide of United keeper Sam O’Gorman’s near post.

But the goal the The Blues play deserved arrived after 10 minutes. A magnificent ball from Niall O’Keeffe sent Alex Phelan clear down the left and he powered an unstoppable left-footed strike from 16 yards past O’Gorman.

The home side could have levelled midway through the first half. Francely Lomboto linked up with Wilson Waweru but Charlie Heffernan was more than equal to his strike.

Joshua Keane Quinlivan was off target for the home side before Cameron Power’s driving run down the left created a shooting chance but he was just off target.

Blues keeper Charlie Heffernan was called into action 10 minutes into the second half as he denied Joshua Keane-Quinlivan.

It was almost 2-0 on 63 minutes. Alex Phelan was alert to intercept a sloppy Adam Rooney backpass, but he couldn’t find the target from a tight angle after rounding keeper Sam O’Gorman.

And Galway took advantage when they levelled from the penalty spot on 67 minutes. Referee Bartley Folan adjudged Blues defender Reece Murphy to have fouled Francely Lomboto on the endline and Joshua Keane Quinlivan fired home the spot kick.

The Blues kept their work rate up and Alex Phelan went close to regaining the lead but he fired over the crossbar.

And the lead goal did arrive with 11 minutes to go. Darragh Power, who missed the semi-final through illness, rose highest at the back post to head home an excellently taken right-wing Danny Reynolds corner kick.

THANK YOU: A massive thank you to the Blues fans who made the trip to Galway to support the Blues this afternoon to cheer on the U19s – it’s greatly appreciated by the team and staff. #WaterfordFC #WFCU19 pic.twitter.com/jLLfOYXZF3

But the Blues sealed the trophy in the 88th minute with another goal of real quality. An exquisite ball from Niall O’Keeffe with the outside of his right-foot from inside his own half sent Alex Phelan clear down the right-side and the Man of the Match drove past Hakeem Ryan into the area before firing a right-footed shot to the far corner to make it 3-1.

But it mattered little when the final whistle sounded and led to massive celebrations from the players, management and supporters that made the long trip to Galway.

Blues U19s captain Dean Beresford was presented with the Dr. Tony O’Neill Perpetual Cup as the Blues players celebrated a magnificent result for the club.