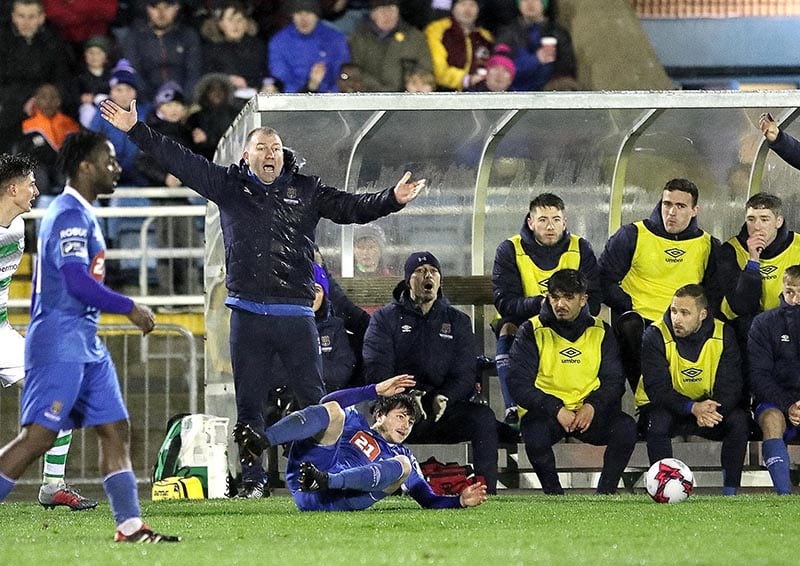 Waterford FC exited the EA SPORTS Cup at the quarter-final stage after a narrow 1-0 defeat away to Sligo Rovers on Tuesday night.

The Blues made nine changes from their 2-1 win against Dundalk on Friday night and manager Alan Reynolds will take positives from the display of his young side.

The Blues started well and Dean O’Halloran had a good early chance, but he fired wide from 12-yards after good play from Gavan Holohan.

Striker Dean Walsh fired at Sligo keeper Mitchell Beaney before John Martin had a chance after good build-up play from Derek Daly and Faysel Kasmi, but he couldn’t find the target.

Matthew Connor had to be alert in the Blues goal as a string of saves kept his side in it.

First, he kept out Caolan McAleer’s effort after he’d been put in the clear by Lewis Morrison, before brilliantly clawing away a header from Greg Moorhouse after the striker met a left-wing Regan Donelon delivery.

Dean Walsh has a half-chance at the start of the second half but his strike was well blocked, before Connor was called into action at the other end to save from Lewis Morrisson.

The game was ebbing and flowing and Kasmi had a chance before the hour mark, but he fizzed his shot across the face of goal.

But the winning goal from Sligo did arrive on 63 minutes; David Cawley heading home from Donelon’s corner.

The Blues looked for an equaliser but it wasn’t to be, while Matthew Connor produced another good save in the final minutes to keep out Adam Morgan’s effort.

Despite the defeat, the Blues will look to build on the positives with a trip to Tallaght Stadium to face Shamrock Rovers to come this Friday.