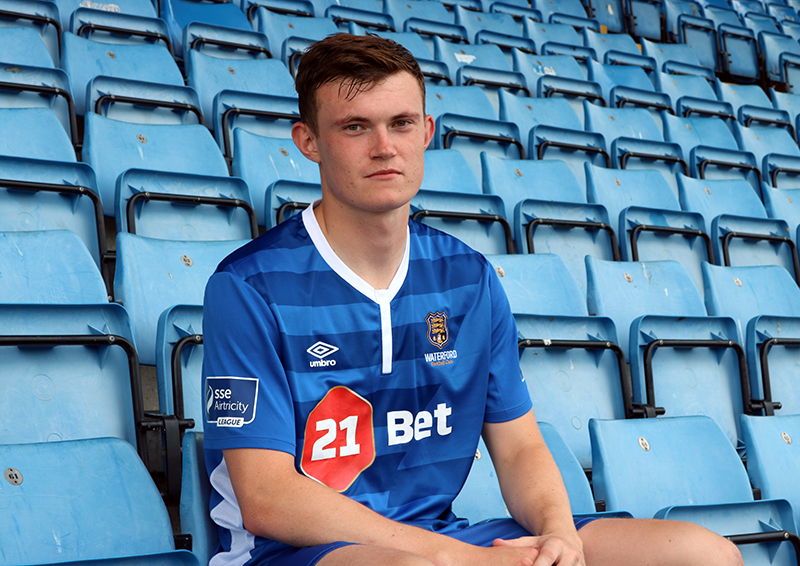 Waterford FC is delighted to announce the signature of Sean Heaney on loan for the remainder of the SSE Airtricity League First Division season.

Heaney, 21, joins from Shamrock Rovers and already has 42 First Division appearances to his name having featured prominently for both Shamrock Rovers ‘B’ in the 2014 season and on loan to Shelbourne in the 2015 campaign.

Heaney became a regular at Shamrock Rovers last season in the Premier Division but has found his opportunities limited more recently in Tallaght following the signing of Bohemians captain Roberto Lopes and the return of Luke Byrne from long-term injury. The left-sided centre half is keen to prove his worth at Waterford and help the Blues back into the Premier Division.

Speaking to WaterfordFC.ie this evening, Heaney outlined his ambitions for loan deal:

“I’m looking forward to it, and to start playing a few games, obviously that’s why I’m here to play games and hopefully help the club get promoted and I can pick up a league winners medal out of it.”

Heaney’s most recent spell in the SSE Airtricity League First Division came in 2015 with Shelbourne when he racked up 25 appearances and chipped in with two goals. The defender hopes that will stand him in good stead for the Blues:

“At Shelbourne in my previous loan spell we didn’t reach our expectations when our goal was to go get promoted that year, that didn’t work out for us but for myself, I showed I was more than capable of playing at this level and hopefully I can push on now and prove to people that I can help get the club promoted and hopefully play in the Premier Division regularly next year.”

The loan move for Heaney sees the Dubliner re-united with Blues’ Director of Football Pat Fenlon:

“I had a great experience with Pat (Fenlon) last year, when I broke into the Rovers team he was the one that put me into the side and I’ll always be grateful for that. It’s got me here now and hopefully I can repay that faith and prove to him that I can help Waterford get out of this division.

“Waterford FC fans can expect to see 100% commitment on the pitch, I’m a big centre half who will attack the ball, win headers, win tackles and hopefully chip in with a few goals up the other end.”

Sean Heaney’s arrival at the club comes as fellow defender David Mulcahy’s contract was terminated by mutual consent. The Kilkenny native, who was in his third stint at the Blues, has had to leave the RSC due to work commitments.

Heaney will be eligible for this Friday night’s home clash with South East rivals Wexford FC at the RSC.