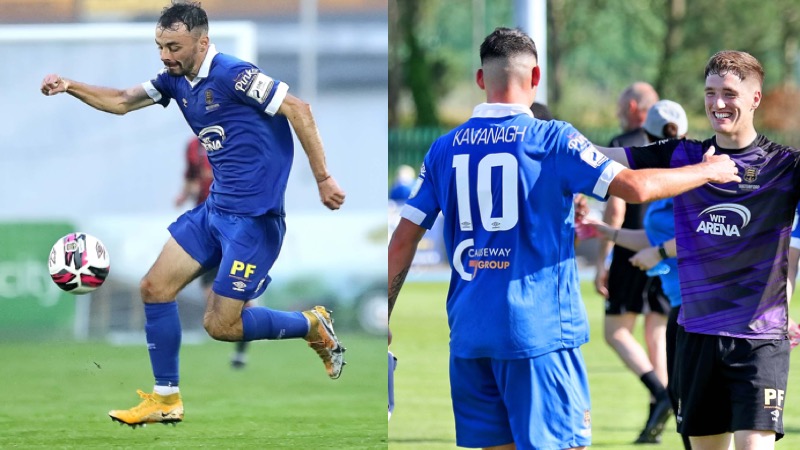 Waterford FC is delighted to announce that Shane Griffin and Paul Martin have both re-signed for the 2022 season.

Both players have come through the Blues underage structure before graduating to the first team squad in recent years.

Griffin, and Martin, both 22, featured for the Blues in league and Cup competition last season and join new signings Kilian Cantwell and Yassine En-Neyah along with yesterday’s retained players for 2022.

Speaking to WaterfordFC.ie, Shane Griffin said: “I’m delighted to be back at the club for the 2022 season. As a local lad it obviously hurt to be relegated last season so I’ll give it my all to get us back where we belong. Ian [Morris] is putting together a really competitive squad and I’m really glad to be part of it. We have to fight for places every week and that’ll really stand to us.

“We know the season won’t be easy at all but I can’t wait to get started in pre-season and look to that first game.”

Speaking to WaterfordFC.ie, Paul Martin said: “I’m absolutely delighted to be re-signing with the club and really looking forward to getting back in training with the squad. I’m very determined to help the club get back where it belongs in the Premier division and I’m very excited to be working with Ian [Morris]. He’s had great success in the league already and he’ll have a great effect on the development of many of our young talented players so I believe it will be a successful season for the club under him.”

Speaking after confirmed the re-signings, manager Ian Morris said: “I have kept an eye on Shane over the last couple of years. He had a good run of games last season and I am sure he will build on that. I believe there is still loads more to come from Shane.

“Paul is a very talented young goalkeeper. He has Premier Division experience and will be an important part of the team this year.”