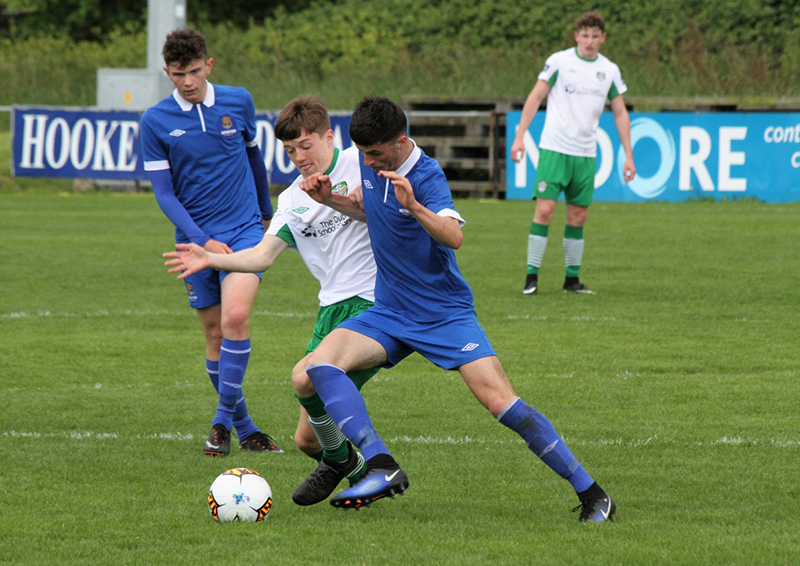 The first win of the season for the Waterford FC Under 19 side was recorded at Stradbrook on Sunday afternoon last as David Breen’s side got the better of Cabinteely by two goals to one in a game that saw the Blues defend resolutely late on.

After the disappointment of losing heavily to Cork City in the Munster Derby the weekend previous, Waterford put that behind them to pick up their first three points of the season. The home side started on the front foot but they were denied the breakthrough goal after ten minutes when he struck the post of Blues keeper Ben Murray.

It was Murray that showed his class five minutes later when he made a super save before Waterford’s Owen Wall cracked a stunning effort after a brilliant run off the crossbar on 22 minutes. The lead goal for the Blues did arrive on 35 minutes when Shane Griffin found the net with a fine effort from 25 yards.

A second Waterford goal arrived with just over an hour on the clock when Darryl Walsh went on a good run down the left-flank before pulling the ball back to Owen Wall and he set up Eddie Black, who hammered a left-footed shot to the net from just inside the penalty area.

Jordan Andre got a goal back from Cabinteely on 73 minutes when he rose inside the area to beat Ben Murray with a header before the hosts did have chances to level the game with Andrew McGovern having a brilliant effort superbly cleared off the line as the Blues held out for the win.

A dominant performance saw Waterford FC secure a vital win the SSE Airtricity Under 17 League as John Furlong’s side got the better of Cobh Ramblers in their clash played at St. Colman’s Park on Sunday afternoon last.

In a first half that saw the Blues control the tie, they held the hosts to not a single chance in the opening 45 minutes as Waterford went in leading 2-0 at the half time break and those two goals proved the different between the sides at the final whistle.

With 25 minutes on the clock, Waterford went in front from the penalty spot when Dean Beresford was bundled over in the area and it was Jack Larkin that dispatched the penalty before Colm Whelan did have chances to extend the lead but he was unlucky not to score.

The second goal was one of top quality for the Blues before the break when some superb one touch passing saw Mike Nzongong, Jack Larkin, Jack O’Donnell and Colm Whelan combine with the latter setting up Regix Madika, who buried the ball to the net. Cobh did improve in the second half but Charlie Heffernan was always comfortable between the sticks as Furlong’s side remain unbeaten after seven games.