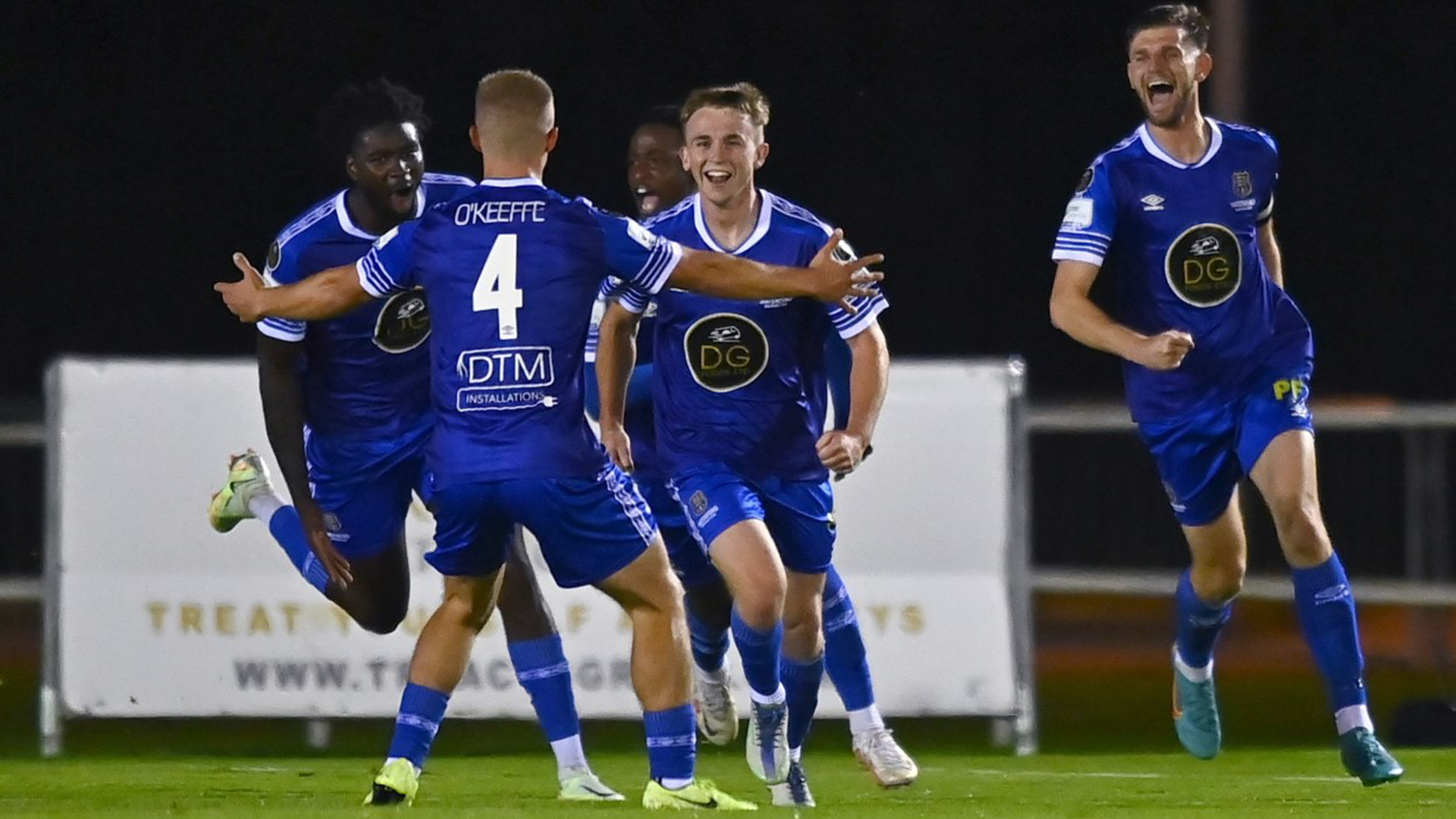 Waterford FC are through to the FAI Cup semi-finals after being League of Ireland Premier Division side Dundalk 3-2 at the RSC on Friday night.

The Blues came from a goal behind to progress into the next round of the FAI Cup and did it in style in front of just over three and half thousand supporters in the stadium.

Goals from Shane Griffin, Darragh Power and Phoenix Patterson saw Waterford go 3-1 up after Paul Doyle’s opening strike gave the visitors the lead. Dundalk did score a second late in injury time through Keith Ward, but the Blues held on for the win.

In what was a slow start to the game, you could feel the tension in the stands and on the pitch as there was a place in the semi-finals, but it was the Premier Division side who took the lead through some fortunate spin on the ball.

After Doyle’s long-range effort – which was tipped onto the bar from Blues’ keeper Paul Martin – the ball came back out into the six yard box and then spun backwards towards the goal.

Despite going a goal behind, Danny Searle’s side didn’t get hung up on the score-line. They made it difficult for the opposition and had chances to draw level moments before getting the equaliser. Quitirna played in Patterson behind the Dundalk defence, but he saw Lewis Macari make a brilliant last-ditch tackle to ultimately keep the ball from finding the back of the net.

Waterford’s efforts finally paid off when Griffin found the back of the goal from 20-yards. After Wassim Aouachria’s cross was headed way by the Dundalk defender, the ball fell nicely to the midfielder who only had one thing on his mind. What a goal indeed.

Momentum was with the hosts and with two minutes left in the first half, Power smuggled the ball home from close range. Kilian Cantwell kept the ball alive in the 18-yard box, with his teammate doing all he could to beat Macari between the sticks.

With five minutes played in the second half, Dundalk had a great chance to level the scoring. Martin made a fabulous save against the forward who looked to just dink the ball over the on-rushing keeper, but he managed to get a firm hand onto the shot to deny it going over the white line.

Waterford pressed and pressed for the third goal and justly got their rewards when Patterson cut in from the left wing and unleashed an absolute rocket into the top right stanchion. It was a goal worthy of winning any match that’s for sure.

With just under 25 minutes left on the clock, Waterford went for the fourth goal but were denied by the Dundalk keeper on numerous occasions.

Deadline Day signing Alex Baptiste made his Waterford debut, coming on for Roland Idowu in the heart of the midfield. With head coach Searle not wanting to mix things up at the back, the former Premier League defender brought some well needed experience in the spine of the Blues team.

Dundalk had chances to make it a nervy last 10 minutes but failed to make their chances count. They did find the next in the 93rd minute of the match through Ward, but Waterford held on to seal the win and to put their name in the hat for the semi-final draw.

The draw for the FAI Cup semi-finals will take place on Sunday 18 September after the final quarter-final match between Derry and Shamrock Rovers.

Thank you so much for your support! You were amazing and we can’t wait to see you all back at the RSC – enjoy your weekend!